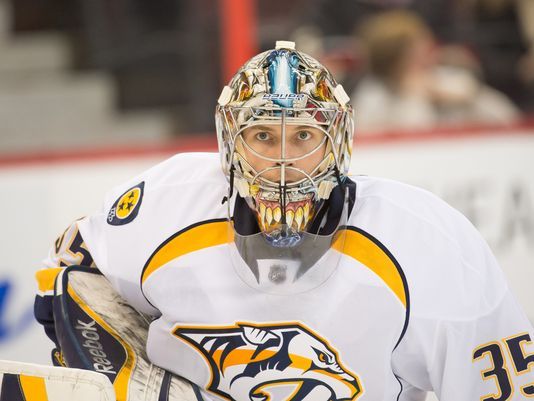 The Stanley Cup Finals get started tonight when the Pittsburgh Penguins host the Nashville Predators at 8PM ET. Here’s our Stanley Cup Predictions for Game 1

According to oddsmakers, the Penguins are the favorite at home in this one, as they are getting odds of -165 to win. Nashville is listed with odds of +145 to prevail, while the over/under total is set at 5.5 goals.

These two met twice during the season, with the home team winning both games. Nashville had a 5-1 win on Oct. 22, while Pittsburgh picked up a 4-2 win on Jan. 31.

Nashville has had a very balanced attack in the postseason, with seven players recording 10 or more points. Filip Forsberg is the leader with eight goals and seven assists while Ryan Johansen had three goals and 10 assists. Johansen will be out of the series due to a thigh injury. Pekka Rinne has been great in net, posting a 1.70 GAA in the playoffs and a save percentage of .941.

Evgeni Malkin has put up seven goals and 17 assists to lead the team while Sidney Crosby has seven goals and 13 assists and Phil Kessel has seven goals with 12 assists. The team turned to Matt Murray in net during the last series. He has a 1.35 GAA in five games this postseason and a save percentage of .946.

The Penguins may be at home, but the Predators have been accustomed to winning on the road. They have taken every Game 1 this postseason and done it on the road each time. Pittsburgh is on a little shortened break as well after winning Game 7 over Ottawa on the 25th. Nashville is rested and ready and make a splash in its first Cup Final. Murray hasn’t been tested by a good offensive team yet. Nashville has put up multiple goals in all but two playoff games this year. They will pepper Murray often and find a way to steal this opener.