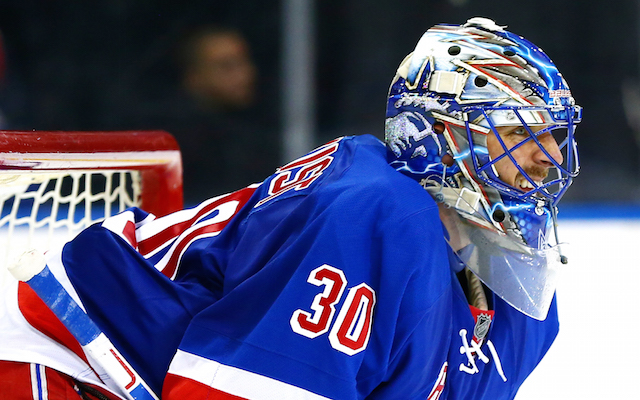 Two Eastern Conference rivals meet up on the ice again tonight when the New York Rangers host the Boston Bruins at 8PM ET. Here’s our NHL Predictions for tonight’s game.

According to oddsmakers at Bovada.lv, New York is favored in tonight’s game, as the Rangers are getting odds of -140 to win, while the Bruins are getting a money line of +120 to win. The over/under total for the contest has been set at 5.5 goals. Tonight’s game takes place from Madison Square Garden in New York, New York. The contest will air live on NBCSN.

Boston is coming off a 5-3 win over the Wild on Monday night. The Bruins are 6-4-3 overall and 1-2-1 on the road. Boston is both scoring and allowing 3 goals per game this season. Both Brad Marchand and David Pastrnak are leading the team with eight goals and six assists this year. Marchand is out indefinitely right now with an upper body injury. Tuukka Rask is 3-4-2 in net this year with a 2.73 GAA and a .903 save percentage.

New York is coming off a 5-3 win at home over the Blue Jackets on Monday for the Rangers fourth straight victory. New York is now 7-7-2 overall and 5-4-2 at home. The Rangers are putting up 3.25 goals per game this season while allowing 3.38 per contest. Mika Zibanejad is leading the team with eight goals and nine assists while Pavel Buchnevich has six goals and six assists. Henrik Lundqvist is 6-4-2 on the season in net. He has a 3.07 GAA and a .900 save percentage.

New York looks to have the momentum entering tonight’s game. The Rangers have won five straight meetings with the Bruins and are coming in on a nice four-game win streak. The Bruins are also coming in a little hampered by injuries, including the loss of Marchand. Boston hast lost eight straight following a win and I think the Bruins are sixing up for another loss today. The public betting is slightly with Boston, but I feel good about the Rangers at home.