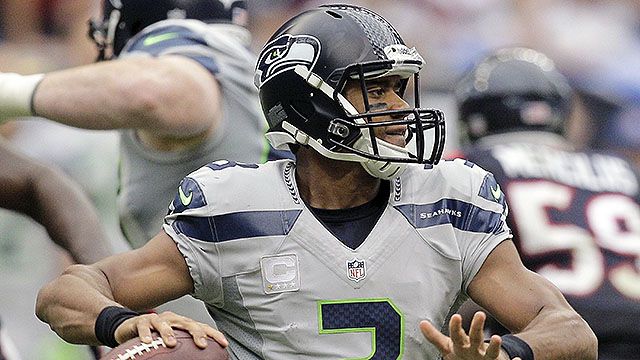 Will the Seahawks cover the spread as a home favorite today when they host the Texans at 4:05PM ET?

According to oddsmakers, Seattle is a 6.5-point home favorite to beat Houston. The Texans opened as a 6-point underdog but the line continues to climb. As for the total, the number hit the board at 42.5 but was bet up a full three points.

The Texans enter play with a 3-3 record straight up and a 4-2 mark against the spread. On the other side, the Seahawks have won four of their last six games but are just 3-3 at the betting window.

ESPN’s Adam Schefter reports DeAndre Hopkins did not attend Texans practice Friday due to owner Bob McNair’s recent insensitive remarks regarding players. It was previously reported the entire Texans team considered walking out. Hopkins, one of the leaders on the team, did indeed walk out, and the Texans told the media it was due to a “personal day.” On Friday, coach Bill O’Brien said he “stands with our players.”

Duane Brown told reporters that McNair’s comments referring to players as “inmates” in a “prison” “sickened me” and admitted he is “very upset.” “I think the comments were disrespectful and ignorant,” added Brown. It’s unclear if the situation will affect Sunday’s game. The Texans travel to Seattle this week.

Seahawks OC Darrell Bevell said he thinks Thomas Rawls is trying “too hard.” Rawls has struggled all year and lost a costly fumble against the Giants in Week 7. Bevell thinks Rawls can get his confidence back by trying to slow the game down. “He wants to do so well,” said Bevell. “He wants to try so hard and sometimes you can try too hard and we just show him that picture and say if you had just a little bit of patience, there are like three guys there to help you set up the blocks and for him to set them up, I guess.” Mired in a timeshare with the equally underwhelming Eddie Lacy, Rawls doesn’t figure to impact many games.

The situation in Houston is a mess. Duane Brown, who just returned to the team, admitted the Texans were eventually persuaded to practice but said the situation involving owner Bob McNair’s insensitive comments regarding NFL players “is not over.” Now the Texans travel north to a play where opposing quarterbacks struggle and teams have been outscored by an average margin of 28-13 since 2013.

The Seahawks, meanwhile, are starting to fire on all cylinders. The offensive line and running game continue to be a work in progress, but Russell Wilson has re-entered MVP talks in recent weeks. Deshaun Watson has been excellent, but I could see this game turning ugly.