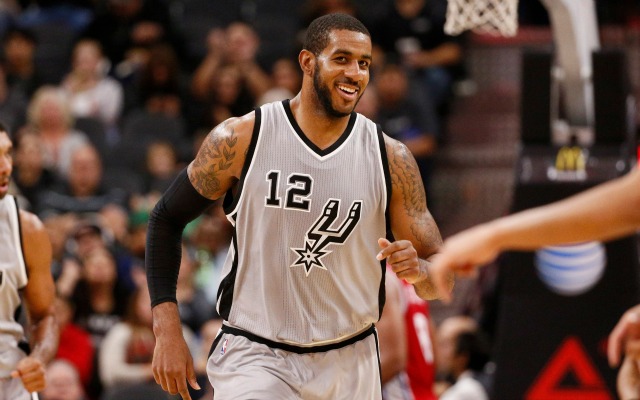 The Golden State Warriors will take on a San Antonio Spurs team playing with heavy hearts on Thursday night in Game 3 of the Conference Quarterfinals. Will the Spurs at least cover the small point spread and possibly avoid a 3-0 series hole? Or will the Warriors take total control of the series already up 2-0?

According to oddsmakers from online sportsbook YouWager, the Spurs are now 3.5-point home underdogs to beat the Warriors, who opened as 3-point road favorites. The total, meanwhile, now sits at 206 points after hitting the board at 207. As of this writing, 88% of betting tickets are on the Warriors to cover the small spread.

Curry to travel with Warriors ahead of Game 3

Stephen Curry (left knee) will travel with the Warriors for Games 3 and 4 in San Antonio. Curry will continue rehabbing with the training staff while on the road. He’s due to be reevaluated this weekend, at which point we should have more clarity on a return date, but for now he’s targeting the second round of the playoffs if Golden State advances to play either Portland or New Orleans.

Also on the injury front from the Warriors, JaVale McGee (left quad contusion) is questionable for Game 3 on Thursday. For what it’s worth, McGee said on Wednesday that he’s feeling “good.” He’s having a terrific first round with averages of 12.5 points, 5.5 rebounds, 1.5 steals and 1.5 blocks through two games, and we should get an update on his status after Golden State’s shootaround. Zaza Pachulia, Kevon Looney and Jordan Bell would be tasked with more minutes if McGee can’t suit up.

Spurs to play with heavy hearts on Thursday

Erin Popovich, the wife of Spurs head coach Gregg Popovich, died early Wednesday. She was 67 and had been battling an illness for an extended period. The couple was married for four decades and had two children as well as two grandchildren.

“We mourn the loss of Erin,” Spurs general manager R.C. Buford said. “She was a strong, wonderful, kind, intelligent woman who provided love, support and humor to all of us.”

As of this writing, it’s not yet known if Gregg would coach the Spurs on Thursday night.

The Warriors are 4-1 against the spread in their last five games in San Antonio and have won seven of their last nine games versus the Spurs overall.

The home team has covered the spread in four of the last five meetings between these two teams.

The Spurs are incredibly overmatched in this series, even with the Warriors playing without Curry. San Antonio just doesn’t have the manpower to match up with Golden State, which has seemingly flicked the switch after a lackluster (albeit injury-riddled) finish to their season.

But if the Spurs were going to win one game in this series it would be this one. First and foremost, they’re 9-1 against the spread in their last 10 home games. They’re also 9-4 at the betting window in their last 13 games coming off a loss of more than 10 points. This is also a proud organization that I expect to rally together and play hard for their head coach in the wake of losing his wife.